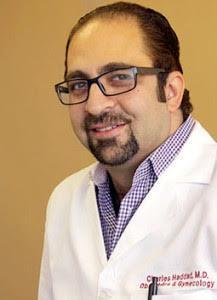 We have been working with Dr. Charles G. Haddad since 2004, this includes consultation, collaborative management and referral as needed. Dr. Charles G. Haddad is board certified by the American Board of Obstetrics and Gynecology and a long time resident of Northern New Jersey, where he has been a leader in the women’s healthcare and surgical community.

He has acquired a broadened familiarity of the New Jersey medical community by serving in a variety of OB/GYN positions, including that as of faculty attending at Somerset Medical and Hackensack University Medical Center at Mountainside Hospital, assisting clinical professor at Mount Sinai, and department chairman at St. Mary’s. He also served as chief resident in the OB/GYN department at St. Joseph’s Hospital and Medical Center.

Dr. Haddad has been in private practice since 2001, and currently maintains hospital affiliations at Hackensack Meridian at Pascack Valley Hospital in Westwood and St. Joseph’s Medical Center in Paterson. Born and raised in Syria, Dr. Haddad received his medical degree from the Faculty of Medicine of Damascus University.

At Holistic Ob/Gyn we focus on treating the women during all phases of their lives.

These services include the following:

Primary care, gynecologic and family planning services, preconception care, care during pregnancy, childbirth and the postpartum period, care of the normal newborn during the first 28 days of life, and treatment of male partners for sexually transmitted infections.

We conduct physical examinations, prescribe medications including controlled substances and contraceptive methods;
Midwives are also authorized to admit, manage and discharge patients as wells as order and interpret laboratory and diagnostic tests and order the use of medical devices. One of the most important aspects of our model of care includes your health promotion, disease prevention along with individualized wellness education and counseling.
Our Locations